French writer, Simone de Beauvoir, once said, “there is something in the New York air that makes sleep feel useless,” and thus, The City That Never Sleeps was born.

Top of the Rock

This year, Presidents Cup is hosted by Liberty National Golf Club in Jersey City, New Jersey, just across the water from Manhattan. Presidents Cup Experiences also offers accommodations at the DoubleTree hotel in NYC’s Financial District. New York City is buzzing 24 hours a day, 7 days a week with endless things to do and sights to see, that even those who live in New York don’t feel as though they’ve seen everything. From the breathtaking views, historic museums, delicious delicacies, fascinating people and so much more, you can be sure every day of your visit will be filled with excitement.

From the 70th floor in the Rockefeller building you have access to 360 degree views of New York City from three different indoor and outdoor viewing decks. Top of the Rock visitors are given three different ticket options, a general admissions ticket, a VIP ticket which gives you priority access to the elevators and a chance to skip any lines, and a guided tour ticket option, where you will be assigned a tour guide who will walk you through the views from the observation decks and provide you with a detailed history of the Rockefeller building. No matter which ticket option you choose, you will not be disappointed by what you see. As a Presidents Cup Experiences Client, Rockefeller Center is just a 30 minute train ride away from where you will be staying at the DoubleTree hotel.

On September 11th, 2011, ten years after the terrorist attacks in 2001, the 9/11 Memorial and Museum was opened to commemorate those whose lives were taken on that tragic day. There are three historical exhibits, one that covers the day of 9/11, the second explores the background of events leading up to 9/11 and the last exhibit analyzes the time after 9/11. The exhibits each tell stories of the events that happened at the World Trade Center, The Pentagon and on Flight 93 through tour guides, film features and live talks.

Outside of the museum is the 9/11 Memorial, which consists of two twin reflecting pools that are about an acre in size and contain the largest manmade waterfalls in America. These pools sit within the footsteps of where the twin towers once stood, and the names of the those who lost their lives are inscribed around the perimeter of the pools. Viewing this breathtaking memorial or walking through the museum is something you can’t miss out on, and with it being less than a mile from the DoubleTree hotel, you will have no trouble fitting this in after a day on the golf course.

There’s no such thing as too much sight-seeing, head up to the 86th or 102nd floor in the Empire State Building to fall in love all over again. Along with the exquisite views from the tallest building in NYC, there are also two exhibits within the building, the Sustainability Exhibit and the Dare to Dream Exhibit. In the Sustainability Exhibit, you will have the chance to see showcases of the state-of-the-art technology and processes that went in to the retrofit that cut down energy usage in the building by 38%.

The Dare to Dream Exhibit pays tribute to the architects, builders and laborers who contributed to what the building is now. This exhibit is full of photos, architectural sketches, construction notes and mementos from the workers on that day, so you will get a good feel for what went into creating this magnificent building. You might even be able to see Liberty National Golf Club from the top of the building!

The list of things to do in New York City is endless, so we’re not stopping there. Check back for more exciting things you can only do in the Big Apple, while attending the 2017 Presidents Cup at Liberty National! 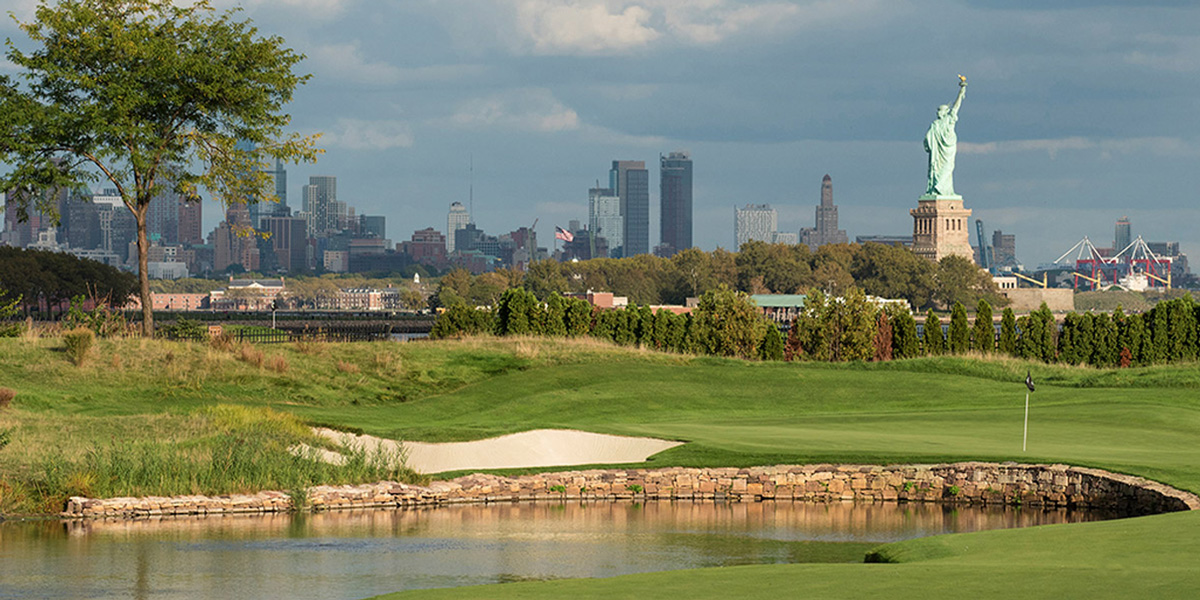 New York City is just a ferry ride away from Liberty National Golf Club in Jersey City, New Jersey. Make your trip to NYC a trip of a lifetime and witness the worlds-best compete for the elite Presidents Cup, on September 26th-October 1st. Presidents Cup Experiences offers a variety of premium event packages with travel and accommodations in NYC’s financial district. With breathtaking views, luxurious amenities and a top-notch course, you won’t want to miss this unmatchable experience! Click the image below to explore our Official Ticket Packages: